February 05, 2014
The latest addition, amongst numerous other reports on the Metro, includes the Lohia Committee Report. Since Metro is proposed in cities of India, considerable thought seems to be now going into (albeit being very late) on 'how to really finance this monster infrastructure?' In 2009, a very rosy picture was placed in front of the urban citizens that this glamorous, silver, shiny Metro will be adequately financed using State and Centre funds, supplemented only marginally by Local Municipal Corporation funds and actual ticket fares. The Lohia Committee report, as it reads today, seems like the government ready to do a backflip on this promise.

The Report begins by saying that the financial burden incurred by a Metro is not justified for availing high international loans as huge amounts will be spent in servicing the interest on these loans. Further, the State and the Centre has limited capacity to provide grants to such infrastructure development. On the other hand, the report continues that, urban mobility can only be addressed by proposals like a Metro, which I feel is a fallacy. Thus, the report urges the Urban Local Bodies (ULBs) to look at "innovative" mechanisms to finance the Metro. Some of the suggestions include raising FSI, levying cess on petrol in cities, toll charges while entering the city, high parking charges etc.

After reading the report, understanding the Metro routes and related changes in FSI and estimating the implications on the lives of urban Indians, the whole exercise of the Metro itself seems like a losing proposition. And I fail to understand who is being obstinate enough to yet push its execution in cities like Pune and Nagpur. When currently, the entire nation is reeling under inflation, rising costs of living, does it make sense to add massive infrastructure that will cause huge amounts of debt? Wouldn't these debts, indirectly be serviced by charging citizens taxes, tolls and cess? Is it really the right time to add to the financial burden of the 'aam admi'?

If we have identified cities as centres of economic growth, should we be incentivizing people to move to cities or push them out with very high costs of living? The urban middle class, despite the raised costs of living, will still survive. But what about the citizens at the edge? Are we threatening this massive displacement of poor people who will move out of cities to reduce their costs of living? And if this happens, it will mean that instead of increasing the density of urban centres, we may end up moving people to the city's fringe to avoid taxes and tolls. And these will be massive settlements just outside the municipal boundaries taking advantage of lower tax regime there, but at the same time using city's infrastructure and amenities. If we are to find thet urbanization will be more rapid at the fringes, does  a network of a Metro inside the city make sense? Or should we be connecting people from outside to the inside? Who then will really ride the Metro and from where to where?

Higher FSI (4.0 proposed) in the Metro Influence Zone (500 m on both sides of the Proposed Metro Line) will mean that huge housing and commercial office space will be generated. Will this ensure dropping of real estate prices? Most probably not. So, since to avail the extra FSI any developer needs to pay 1.5 times the actual rate, creation of this 'undemanded' housing stock will make real estate development with 4.0 FSI economically unfeasible. So the additional 3.0 FSI over the actual 1.0 FSI will remain notional. And finally, if it remains notional, that means the objective of increasing the population density in the city centres will not be achieved. Once again, I come back to my original question...Who will really ride the Metro to make it a feasible option? Further to my argument in the point above, if most people who will ride the Metro are from outside to inside the city, why should existing areas of the city disrupted with the 4.0 FSI densification?

Thirdly, there is a cess that will be levied on properties within the Metro Influence Zone that will fail to redevelop and use the 4.0 FSI. This cess will be levied annually at the rate of 5% of the property value. Consider a situation of a bunglow owner in Kothrud or Prabhat Road. This person will be dependent on a Developer to negotiate an amalgamation so that the overall land will be more than 21000 sq ft (0.2 hectraes). This is a pre-requisite for availing the much hyped 4.0 FSI. So, while the cess is an incentive for redevelopment, it can become a negotiation threat that a Developer can possibly use against property owners. Is there a mechanism that is being established for arbitration of such disputes? If not, once again, many of these properties will come under litigation, thereby not facilitating the use of 4.0 FSI and I returning to my original question....Who will really ride the Metro?

Fourth point is that many properties in the Metro Influence Zone are unlikely to use the expensive paid component of 3.0 FSI, due to failing to have the right road widths to avail of maximum height for the new building. Is it justified that these property owners will be levied the cess for failing to redevelop to 4.0 FSI?

Lastly, in Pune we are all a part of a growing city. The arms of the city are extending in five major directions, four of which will come under the Metro Line. The Metro lines will connect Kharadi to Vanaz and Katraj to Hinjewadi. So, while the Metro lines will be of benefit to the people on the fringe, the properties and lives of people in the city centre is threatened to get disrupted. Pune, still being a relatively compact city, a distances within the city centre are short and less people in these areas will tend to ride the Metro. However the Metro Infleunce Zone threatens to disrupt these people, while the true beneficiaries of the Metro Line will remain relatively unaffected.

With these arguments, I vehemently oppose the Metro proposal as it stands today, its route alignments and its financing options. This Metro proposal will create a mess of Pune that will be very difficult to fix. It will reduce the quality of life of Punekars as we will see more people in less area, high street crowding and more competition to use the meager amenities existing in the city. If you remember, I had written a blog earlier about diminishing green space per person in Pune.

I implore all Punekars to rise and demand that,
1) A detailed study should be conducted on the socio-economic implications of the 4.0 FSI and neighborhoods before it is proposed for the Metro feasibility
2) A detailed traffic forecasting and scenario planning of alternative transport policies, rather than remain fixated by the Metro proposal
3) Plans that promise to increase walkability in the city, a very important component if Metro is to be successful and feasible
4) Detailed study and plans on the fiscal burden and potential increase in cost of living in Pune due to the Metro and the taxes and tolls levied for its financing.

Why, without these, should we Punekars blindly accept a Metro?


Attached below are the proposed Metro Routes. Due to the file size required to see the routes, please scroll to the right to see the full image. 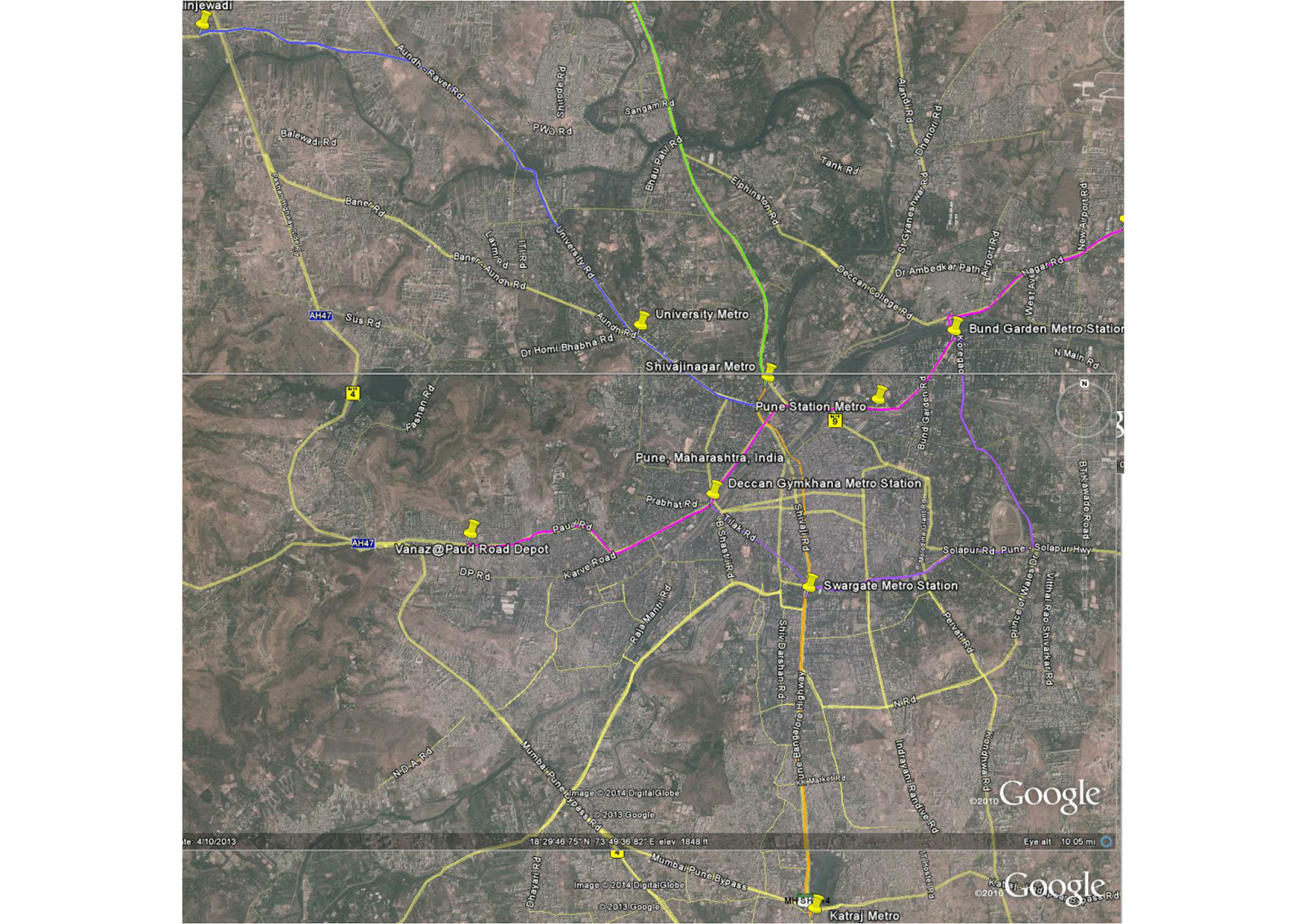 Popular posts from this blog

The most damage happening to Pune's Hill Tops and Hill Slopes is due to the BDP Reservation that came into being as a brainchild of some activists posing as Urban Planners. The 4% development rule in the core city of Pune has also ensured that Hill Tops and Hill slopes have been retained, but the requirement of land acquisition forced by the BDP Reservation actually caused maximum damage to the city's hills on its fringe.

Have you seen citizens get divided over an issue of a hilltop or a hill slope in the core city of Pune? No. The reason why citizens and political parties are so divided over the issue is because the BDP reservation has made them unnecessarily take two extreme positions when it comes to hills in Pune. These both warring sides have forgotten that Urban Planning is often about compromised allocation of land resources to meet the demands of various functions in a city.


And by compromise I don't mean that we should compromise giving up Open Lands, Riverfronts…
Read more

The Proposed Development Control Rules (DCR) for Pune - An Analysis

January 07, 2016
This analysis of the Proposed DCR is coming a bit late. The frenzy of voices for and against the DP and the DCR have died down. Nevertheless, as a loyalty gesture to my blog followers (:-), here is a quick Analysis of the DCR that I have presented in various fora:

The Proposed DCR are radically different from their predecessor and I am glad of that. In the government, very rarely do we see officers taking a radical approach and this is surely a good sign. The document itself is actually quite well organized, short and to the point, with many issues given clarity, instead of just leaving decisions to the discretion of the Municipal Commissioner. Personally, I liked the shortness and crispness of it.

Secondly, a very serious attempt has been made to simplify the FSI equations. This will make the life of architects better (who want to seriously practice & build good buildings), but this will also ensure that the right revenue dues are brought in by the Local municipal government. Wi…
Read more